The Missing Sister by Lucinda Riley was published 3 weeks before her death!

From the Sunday Times number one bestselling author Lucinda Riley, The Missing Sister is the seventh instalment in the multimillion-copy epic series The Seven Sisters. The UK’s Daily Mail writes: “They’ll search the world to find her. I have loved the Seven Sisters from the get-go and this latest in the series is just as great as the rest . . . As ever there’s a brilliant historical subplot.” The six D’Aplièse sisters have each been on their own incredible journey to discover their heritage, but they still have one question left unanswered: who and where is the seventh sister? They only have one clue – an image of a star-shaped emerald ring. The search to find the missing sister will take them across the globe – from New Zealand to Canada, England, France, and Ireland – uniting them all in their mission to complete their family at last. In doing so, they will slowly unearth a story of love, strength and sacrifice that began almost one hundred years ago, as other brave young women risk everything to change the world around them.

This author success study into The Missing Sister by Lucinda Riley reveals that multiple karmic debt numerology numbers powered her 2021 No1 bestseller, with karmic debt number 13 providing the solid core of how things worked.

About Lucinda Riley and The Seven Sisters

Lucinda was born in 1965 in Drumbeg in Northern Ireland, living there for five years before moving to the UK. Both her mother and great-aunt were professional actresses, and her great-uncle was chief lighting designer at the Royal Opera House in London, so she grew up in a creative world. Yet it was her father who encouraged her writing – very rarely at home as he travelled the world for work, he’d arrive back suddenly, always with a gift for her from wherever he had been. Then he’d tell her stories about the places he’d visited, peppered with characters she still remembers to this day. in 2013, standing outside on a starry night in Norfolk, Lucinda came up with the idea of writing a seven-book series, based allegorically on the myths and legends of The Seven Sisters of the Pleiades star cluster. Her interest in Greek myths and philosophy could therefore be utilised throughout the stories, all gently peppered with anagrams and metaphor. Her books have been nominated for numerous awards, including the Italian Bancarella prize, The Lovely Books award in Germany, and the Romantic Novel of the Year award. In 2020 she received the Dutch Platinum award for sales over 300,000 copies for a single novel in one year – an award last won by J.K. Rowling for Harry Potter. Lucinda was diagnosed with cancer in 2017 and died on June 11th 2021, surrounded by her family. Her proudest moment was, after 30 years writing, ‘The Missing Sister’, published only three weeks before she died, becoming her first hardback No 1 in both the UK’s Sunday Times and in Ireland. 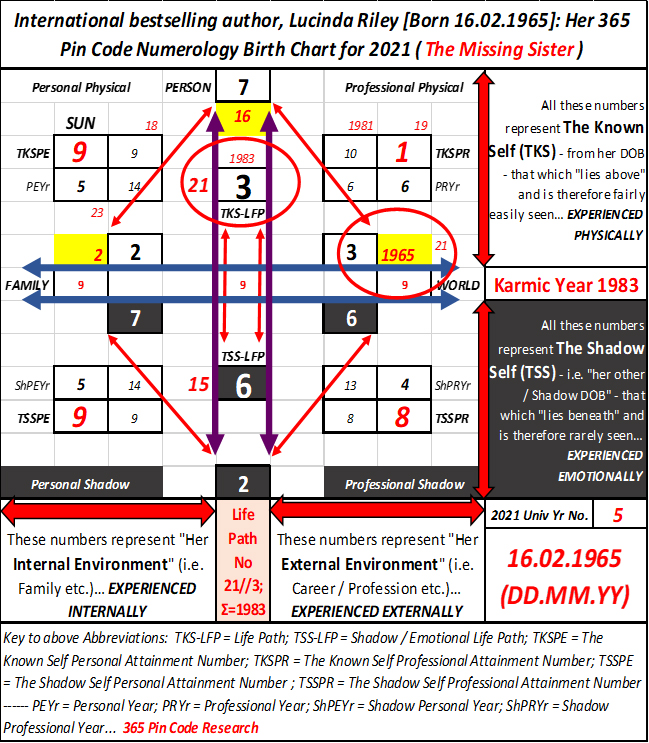 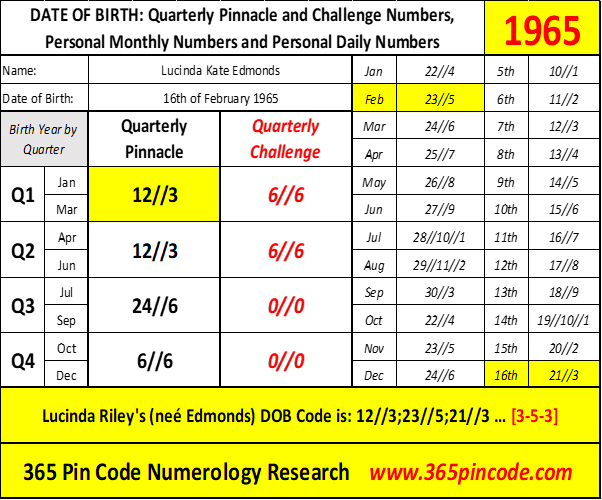 “Every human being has a fascinating existence, with a big cast of good and evil characters in each. And almost always, somewhere along the way, magic.” Lucinda Riley

Born on the 16th (this introduces numerology karmic debt number 16 as her physical vibration) of February 1965, her 4th and final pinnacle and challenge experience began in 2017, with her pinnacle being driven by numerology sequence 1967//23//5 (No5 has as its most dominant themes: change, personal freedom, adaptability, experiencing life through the 5-senses etc.) and her challenge experience being driven by 1//1 (No1 has as its most dominant themes: independence, leadership, innovation, original creation, bravery etc.). What is particularly interesting to note is that her 2nd pinnacle experience which started in 1999 and lasted through to 2007, is defined by numerology sequence 1981//19//1 which synchs with her birth chart’s Professional Attainment Number (see top right, TKSPR, 19//1). Numerology number 19 is yet another karmic debt number which has as its very core, numerous powerful life lessons centred around original creation, independence, and leadership. 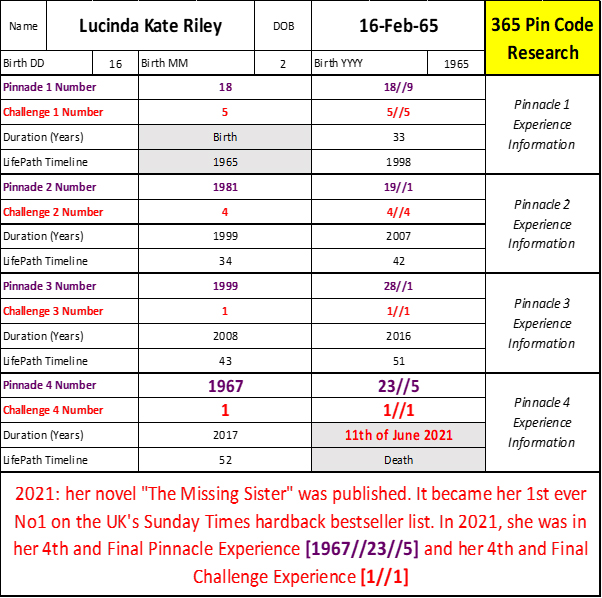 Lucinda Kate Riley (full married name) has two karmic lessons, one related to numerology number 6 (family, relationships, responsibility, matters of the heart, sense of community etc.) and the other related to numerology number 8 (money, power, wealth, status, legacy, safety, and security, finding the balance between the material and spiritual worlds etc.). Her two karmic lessons give her a subconscious-self (as in the emotionally driven self; that which lies beneath and is rarely seen) number 7, which is the researcher, the seeker of truths, the analyst, the critical thinker, the perfectionist, the one who naturally taps into elevated cosmic consciousness. 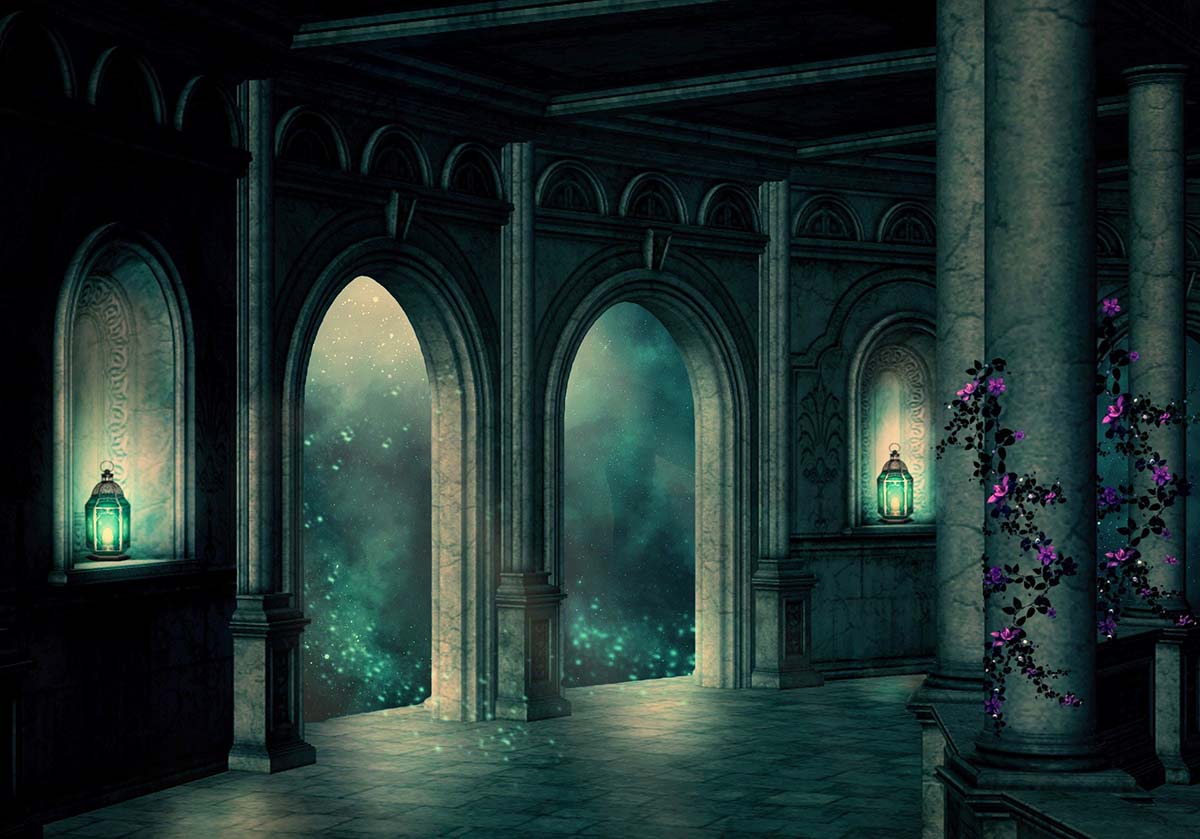 In the above chart we reveal that her primary soul urge is 33//6, which brings the extremely rare master number 33 (The Master Teacher) into play, 33 being the ultimate master number in that is has master number 22 (The Master Builder) and master number 11 (The Master Intuitive and Visionary) contained within it as subsets supporting it. Note that her married surname, Riley, which is her spiritual vibration, is also 33//6.

“Each of us thinks that our own mistake is the worst, because we have made it. We all live with guilt for our actions, Maia. Especially if we have chosen to keep them inside us for as long as you have. I’m sitting here feeling only sadness for you, not disapproval. And I really think that anyone else who heard your story would feel the same. It’s only you who blames yourself.” Lucinda Riley, The Seven Sisters

Her Primary Personality is master number 11 – The Master Intuitive

The above inclusion chart reveals that her primary personality number as calculated from her full married name, Lucinda Kate Riley, is 38//11//2. Master Number 11 (sometimes expressed as MN-11) is the intuitive, visionary one, whose personality and ways illuminate the darkness, within us and others too! This in turn serves to provide enlightenment to those who are prepared to open their minds to the paradigm challenging narrative.

Now, with all this numerical detail and personalised information to hand, let us turn our attention back to exactly what numbers in 2021 were powering the tremendous success of The Missing Sister by Lucinda Riley.

2021, being a numerology number 5 universal year, synchronises with her:

Then, other important synchronicities are No7 (The Seven Sisters Series) related, these being:

In this mesmerising seventh instalment in her bestselling series, Lucinda Riley sets the six D’Apliese sisters on a global quest for the last missing piece that might unite their family at last. The six D’Apliese sisters have each been on their own incredible journey to discover their heritage, but they still have one question left unanswered: who and where is the seventh sister? They only have one clue – an image of a star-shaped emerald ring. The search to find the missing sister will take them across the globe – from New Zealand to Canada, England, France, and Ireland – uniting them all in their mission to complete their family at last. In doing so, they will slowly unearth a story of love, strength and sacrifice that began almost one hundred years ago… Waterstones.com 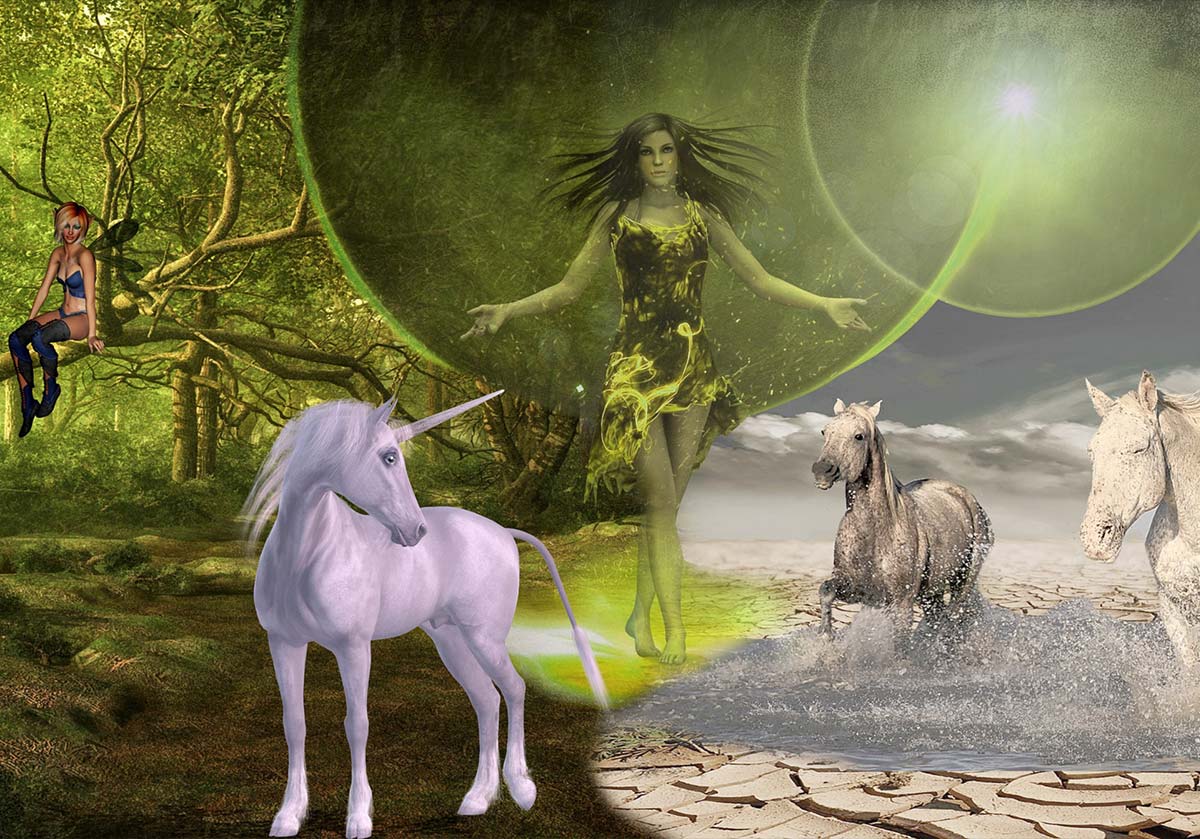 And in the end, it all came down to the No3…

Last, but not least, it is incredibly important to draw your attention to this fascinating No3 related numerology synchronicity which carries tremendous significance in terms of Lucinda Riley aligning effort with reward, or otherwise stated, MATTER (what we produce, the visible tangible RESULT) with SPIRIT (the invisible intangible INTELLIGENCE we inspirationally tap into, to shape ideas into form and/or substance).

The Missing Sister by Lucinda Riley was her seventh and if you will, final book of the series, and when we apply numbers to this collective body of work, the letters compiling the name “The Seven Sisters Series” total 93 (93 = 9+3 = 12 = 1+2 = 3; 93//12//3), which introduces numerology sequence 12//3 (aka The Hanged Man, No12 tarot major arcana). In case you have forgotten, No3 is the number of inspired, creative, imaginative, communication. 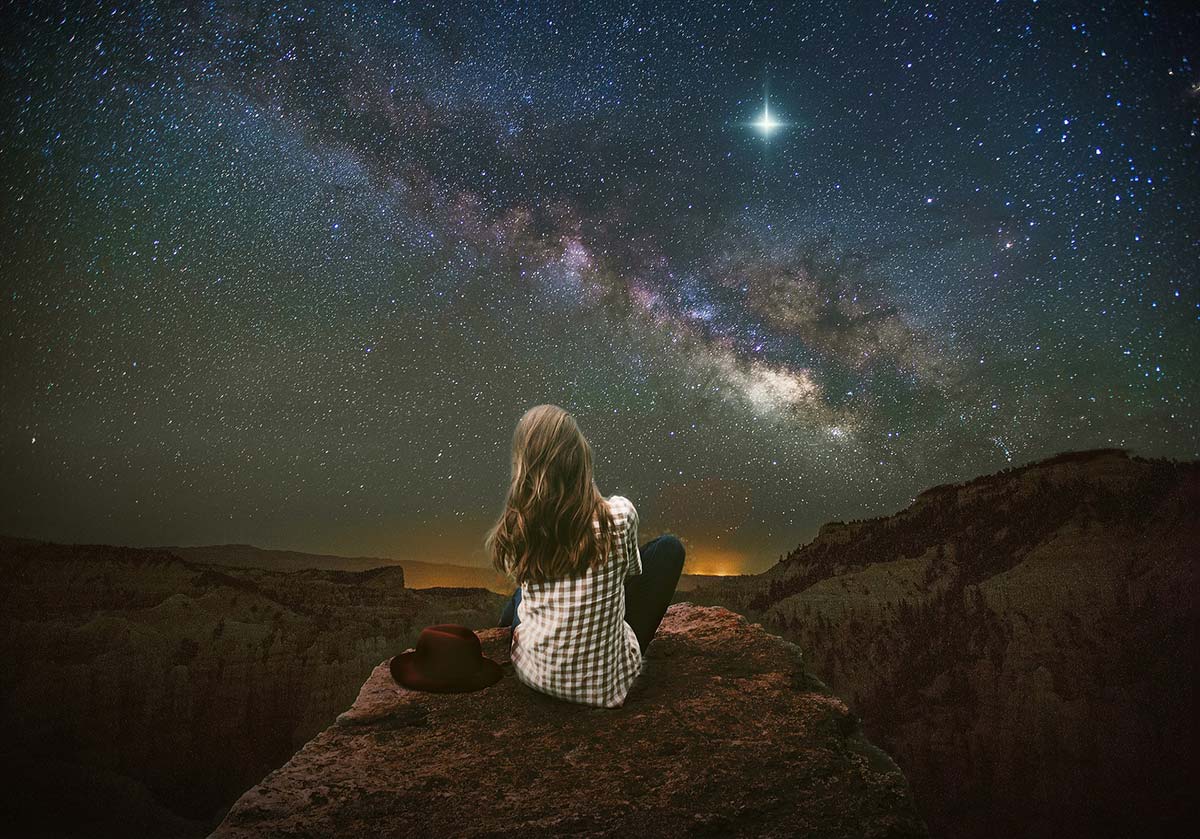 Image by Darkmoon_Art from Pixabay

Image by Maria Lorenz from Pixabay